The essentials of halftime betting

Halftime Betting: Betting on sports matches isn’t just limited to whole match wagers, it is also possible to place bets during the match and at halftime, here I will highlight the essentials of bets you place during half time.

When betting on half time markets

It is important to pay attention to what you witnessed in the first half, or if you weren’t watching the match, then check out the statistics.  Did one team have all the momentum? Did penalties or set plays have a major affect on the match?

Did a large number of players pick up a yellow card and will have to play the second half with a risk of being sent off? Was there already a red card shown?  Could the weather influence the second half?  There are so many factors that you should consider before placing your bet, after considering the first half then you need to think about the options on the substitutes bench for the second half, could someone be bought on and be a game changer, had their best player/s been rested in the first half but could be bought into play to completely change the match in the second half?

Consider the bets you have already placed on this match, ether pre-game or in the first half, let that influence your half time bet, it can give you a chance to double up your winnings on the same market if you still feel strongly for it or if you are smart you could use your initial bet, coupled with your half time bet to make some serious profit!

The benefits of halftime betting

These are that you have had a chance to watch both teams play the first half, which puts you on an even playing field with the bookmakers, as you have access to the same information that they do.  Other advantages are that bookmakers have to set their lines quickly in order to get them out to the public during half time so you could benefit from particularly generous odds on a particular market (there could be value in the second half lines, totals, etc) 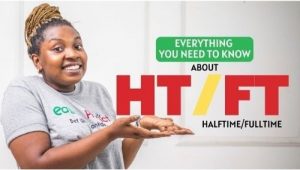 The biggest potential downfall of betting at half time is if you mismanage your bankroll, with so many betting opportunities available, you could stake too much and place too many bets. It is imperative to have discipline and ideally stick to a strategy of your own.  Factors like researching the two teams before the match starts, to compare statistics in the league / cup so far this season, and scores from past meeting between the two sides, all this information is freely available on the Internet.

Is one team on a winning streak?  Whilst watching the first half, or following the live commentary, try to predict what might happen next.  It helps to have a solid understanding of the sport that you are watching, because while at the end of the day it is a bet in which anything could potentially happen, doing a bit of research or following the vital in game details can help you make a more pre-judged decision when placing your bet.